Originating from the vision of a traditional Hawaiian elder, Nurturing the Roots (NTR) began in 1996 as an effort to bring together artists/educators, activists and indigenous leaders from around the globe to share with one another their cultures, stories, arts, and successful teaching strategies, with the goal of creating a global network that would train trainers in indigenous knowledge and community revival.

The name Nurturing the Roots was chosen for the program to convey the idea that the roots of any community are its elders, culture, language, art and history. The ability to transmit this information to a community’s youth is paramount. By energizing these roots, we hope to stimulate the growth of ever more beautiful “flowers,” helping communities regenerate themselves while giving the roots well-deserved support and reinforcement. Programs which bring youth and elders together are key components of helping a community to harmonize itself culturally and ecologically.

During the three-year program (one week per year for three years), NTR participants are immersed in the key areas of our curriculum: Thanksgiving, Traditional Tracking & Survival Skills, Nature Awareness, Peacemaking, Cultural Awareness, The Arts of Life, Personal Development, Community Education, Ceremony, Leadership, International Community and Renewal. Each day follows a traditional learning model offered to us by our mentors from the Iroquois Confederacy. 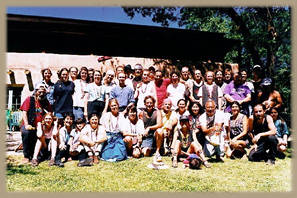 Central to our philosophy, symbolized by the 13 plates of the turtle’s shell, is the idea that no one cultural group “has it all,” that everyone was given a piece of the whole, and that we must bring the pieces back together to complete the picture of who we are as people on the Earth. This is reflected in the cultural composition of our global network, which now includes: Mohawks, Senecas, Miccosukees, Diné, Puyallups, Aztecs and other Native Americans; Anglos, Chicanos, Hawaiians, Filipinos, Burmese, Swedes, Spanish, Chinese, Japanese, Brazilians; and Aboriginal Australians from three southern language groups—the Kaurna, Narranga and Ngarrindjeri—as well as Brazilian Indians from the Kurá-Bakarí and Yawanawa tribes.

These programs, when completed, will have graduated over 250 people, many of whom have already gone on to create their own mentorship circles, programs and/or curricula based on NTR teachings.

A sampling of projects from around the world which have sprung from the inspiration of our mentor graduates:

❖ Círculo dos Saberes, Brazil. A Native spiritual Youth and Elder gathering in the state of Mato Grosso, founded by Isabel Taukane, a member of our mentor circle from the Kurá-Bakairí tribe.

❖ Projeto Pegadas Brasil. A branch of The Tracking Project based in Brasília, Brazil, initiated by mentor Bento Viana, with assistance from Edison Luis Guedes Neves and others.

❖ Mebuyan Peace Project, Mindanao, the Philippines. A collective of Filipina artists, composers and performers in the southern Philippines dedicated to peace performances and peace activism, inspired by Geejay Arriola and other members of our mentor circle.

❖ Wild Friends, New Mexico. A program of the Center for Wildlife Law at the University of New Mexico which advocates wildlife preservation through education, founded by mentor Ruth Musgrave.

A short explanation of the MENTOR OUTREACH program here.

A short explanation of the INTERNATIONAL PROGRAM here.

A short explanation of the NATIVE COMMUNITIES PROGRAM here.